Too Big For His Britches??

I almost fell over the other day when I saw in the Freeman that Alderman Dunn was only willing to meet with Mayor Gallo on "neutral territory", which he decided was the office of Assemblyman Kevin Cahill.  This is really not "neutral" ground as Dunn's mentor, Tom Hoffay, is employed by the Assemblyman.

Regardless, it was not whether the location was neutral that offended me.  It was the audacity of a first term Alderman stating he would not meet with the Mayor of Kingston in the Mayor's Office or anywhere in City Hall.

When I was an Alderman, I met with Mayor Sottile a few times.  If he asked to meet with me, I always went to the Mayor's Office.  Mayor Sottile and I did not always get along, but I never disrespected the office of Mayor by refusing to meet him in his office.  After all, I may have been an Alderman representing a ward, but he was the Mayor of the entire city.

I have to ask who Alderman Dunn thinks he is telling Mayor Gallo that he would not speak with him in the Mayor's office.  Such a statement is disrespectful to the office of Mayor, let alone to Mayor Gallo himself.  The Common Council as a whole is equal to the Mayor, but an individual Alderman is not and neither are a group of Aldermen.  It is only the Council as a whole.

Moreover, the place for city business to be conducted is City Hall, not an Assemblyman's office.  If there is to be discussion of a State matter, than an Assemblyman's office is appropriate.  This is city business and should be conducted at City Hall.  Frankly, I am surprised the assemblyman would permit the meeting in his office.  I do not like Kevin, but I know he is intelligent and politically crafty.  What possible political gain is there for him if he gets in the middle of this political tiff?

Alderman Dunn needs to be very careful.  Alderman Hoffay is facing almost certain defeat in the 2013 election.  (Just ask former Alderman Landi what happened to his seat when he decided to take on Shayne's brother)  If Dunn continues with this alliance with Alderman Hoffay, he too will lose his elected seat.
Posted by Richard T. Cahill Jr. at 9:41 PM 3 comments:

It used to be that the only way to escape oppressive taxation in this country was to leave.  Now, Democrats want to tax people who leave.

Chuck Schumer has introduced a bill that would require a massive tax be paid by anyone who renounces their United States citizenship and leaves the country.  Apparently, the man who is putting Facebook on the stock market has renounced his citizenship and has become a citizen of Singapore.  (There are no capital gains taxes there).

Schumer thinks it is constitutional for the United States government to force this man to pay a huge amount of taxes as a penalty for leaving the country.  Sorry, Senator, but such a move is unconstitutional and illegal.  It would not only be unconstitutional to tax a non-citizen, but also it would be an ex post facto law.  In other words, Congress cannot pass a law making something illegal and then go back prior to its passage to prosecute someone.
Posted by Richard T. Cahill Jr. at 9:39 AM 3 comments:

A Great Night of Boxing 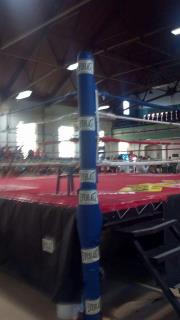 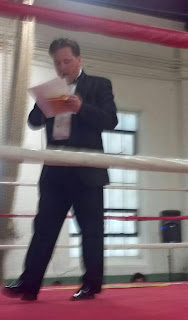 This past Saturday night, there was an amateur boxing card at the Murphy Recreation Center (Bill Costello gym) in Kingston.  I was honored to once again be the ring announcer.  The card was excellent and very entertaining.  There were special guests including Renaldo Snipes, the former #1 ranked Heavyweight contender famous for knocking down Larry Holmes in round 7 of their championship fight.

This was the first card since the passing of Kingston's Champ, Bill Costello.  There was a moment of silence and 10 count ringing of the bell in his honor.  Interestingly, all three boxers for Costello's gym were victorious and I am sure the Champ was smiling from above.

There is a good chance of another card in November.  I urge everyone to attend.  Below are the results of the evening's card.

In a shocker, President Obama saw a Texas inmate get over 40% of the vote against him in a West Virginia primary.  Now, in what is being called "politically cataclysmic", the President finds himself with only a 7 point lead over an unknown Tennessee attorney in Arkansas.

A poll of Democrat voters in Arkansas shows Barack Obama receiving support from only 45 percent of Democrats, while 38 percent support his underfunded and relatively unknown primary challenger, John Wolfe, Jr.  There are 17% of the voters that are undecided.

Let me be clear.  I have no doubt that President Obama will win the Arkansas primary.  The point is that it should not even be close considering that he is the sitting President and his opponent is unknown.

I must ask though.  If Obama were to lose, would he be crying "Wolfe"??

Keith Judd, an federal prisoner serving time at the Federal Correctional Institution in Texarkana, Texas, for making threats at the University of New Mexico in 1999, received 41% of the Democrat Primary vote in West Virginia.  He even qualified to have a delegate to the Democrat National Convention.  He also apparently won in 10 counties throughout the state.

As noted by the AP, "Just how unpopular is President Barack Obama in some parts of the country? Enough that a man in prison in Texas got 4 out of 10 votes in West Virginia's Democratic presidential primary."

Now, I realize that people will point out that Mitt Romney has won some states with 40% or less of the vote.  That's fair enough, except the field was always at least 3 or 4 candidates in those states.  Moreover, he never ran against a convicted felon.  His opponents were a former Senator, a former Speaker of the House, and a Congressman.

I guess it is safe to say that West Virginia will be going red this year.

I know I have not posted recently as much I have in the past.  Many have asked if I am giving up the blog.

I will start posting articles again soon.  Over the last 3 months, I have taken time largely away from political life.  I hope in the weeks ahead to start posting again in earnest.
Posted by Richard T. Cahill Jr. at 8:00 PM No comments: