Earlier this evening, the Candidates' Committee of the Kingston Republican Committee, after interviewing all of the candidates and questioning them extensively, announced their recommendation for Mayor. The committee recommended me for the nomination. While it is the entire committee that ultimately nominates the candidate at a convention, I am still extremely honored by their recommendation.
Posted by Richard T. Cahill Jr. at 10:38 PM 14 comments:

A Great Tribute to the Champ 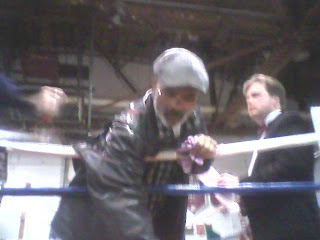 Last night, I was honored to be the ring announcer for the evening of amateur boxing honoring "The Champ" Billy Costello. Also in attendance were boxing greats "Gentleman" Gerry Cooney and Renaldo Snipes.

The evening was a touching tribute to Costello who packed the Mid Town Neighborhood Center to the rafters for his three successful title defenses in Kingston. Billy was presented with numerous awards including a beautiful trophy shaped like a boxing glove given to him by the Chairwoman of the New York Boxing Association.

Once the boxing card started, the crowd was treated to a heck of a show. The Irish National Team was extremely impressive from top to bottom. Not to be outdone, our boxers put on a display of pugilism and actually won 2 of the 5 contests. There was not a bad bout the entire evening.

At the end of the show, Renaldo Snipes and Billy stuck around to meet fans and sign autographs. Gerry Cooney could not stay for the entire show, but he was in attendance early. He shook hands, signed countless autographs, and mingled with the crowd.

In short, this was an evening I will not forget. Like many, I was choked up during the standing ovation given to Kingston's champ. Billy spoke softly and briefly, but his emotion was obvious. It was a tribute truly worthy of "The Champ".

Board Votes To Close Meagher School

Without holding a significant public forum as promised, the School Board voted 6 to 3 to close Meagher School earlier this evening. It might interest the public to know that no Aldermen showed up at the meeting. Other than myself, none of the candidates for Mayor showed up. I find that disgraceful.

Where was Bill Reynolds? Meagher is in his ward. Where was Clement? Polacco? Gallo? Turco-Levin? None of them showed up to fight for Meagher School.

For those interested, the following people on the Board voted to close Meagher: Uhl, Coston, Childs, McCoy, Farrell, and Shaughnessy. There were 2 no votes and 1 abstention. Of all the members, the one who pushed to the hardest was Chris Farrell.

Regardless, Meagher School is coming to an end. It will either sit and rot, or the Board will sell Crown Street and move its offices into the Meagher Building. It is a sad day in Kingston.
Posted by Richard T. Cahill Jr. at 9:47 PM 10 comments:

On Wednesday, March 16th at 6:00 p.m. at Miller School, the Board of Education will formally receive the plan from the Master Plans Committee to close Meagher and Sophie Finn schools. I urge the people of Kingston to attend this meeting and speak out in opposition to this plan.

Meagher and Sophie Finn are important parts of 2 significant neighborhoods within Kingston. We cannot sit idly by and allow the Board to close TWO city schools. Why should the children of Kingston be sent by bus all over the county when so many are currently able to walk to a neighborhood school?

Let your voice be heard at this important meeting.
Posted by Richard T. Cahill Jr. at 4:17 PM 2 comments:

YNN did a news story about the race for Mayor in Kingston. Click HERE to see the clip.
Posted by Richard T. Cahill Jr. at 10:54 PM 6 comments:

Report on School Board Meeting

Unfortunately, I arrived late to the meeting (had to take a family member to the hospital) and missed the first speaker. Nevertheless, the Board was just coming out of Executive Session when I arrived. The only politicos present were: Alderman Turco-Levin, Alderman Clement, and Alderman Fuentes.

Hours later, when the Board finally addressed the issue, they simply stated that the formal written report was not being delivered until the next meeting. No other discussion was had.

The next meeting of the Board will be March 16th at 6:00 p.m. at the Miller School. Hopefully, an even stronger attendance will help send a message to the Board.
Posted by Richard T. Cahill Jr. at 8:07 AM 12 comments: